At home with the Baron de Redé

It’s been a bit morbid around here lately, hasn’t it? It’s just struck me how many fascinating people met their (often messy) deaths in November. If you’re bummed out by all this self-harm and tragedy it’s probably time we dropped in on the Baron de Redé.

Alexis Dieter Rudolf Oscar von Rosenberg was born in 1922 of Jewish parents, though he was raised Protestant; his father, a banker, had been ennobled in the twilight of the Habsburg Empire. The young Alexis grew up in Zurich’s Dolder Hotel, where the family initially had a suite of 16 rooms (one of which was reserved for his mother’s flower arranging) but as the father’s fortune shrank so too did their quarters until eventually they were living in just two rooms. Alexis was nonetheless sent to the exclusive Le Rosey school where a fellow student, the future Shah of Iran, admired Alexis’s feminine charm, “which might belong a little to a rose”.

When his father went bankrupt and killed himself in 1939 (sorry! There was a bit of tragedy after all), Redé was left with the taste but not the means for luxury, so it was a stroke of luck that in New York just two years later he met Arturo Lopez-Wilshaw. This Chilean businessman, one of a wave of fabulously wealthy South Americans who rose to social prominence in Paris in the early 20th century, made his fortune from potassium-rich guano deposits. Lopez-Wilshaw was smitten with Redé, and frankly someone who could turn shit into gold was just the kind of man the baron needed to finance his lifestyle. The offer of $1 million to return to Europe with him sealed the deal, though Lopez-Wilshaw’s wife Patricia was understandably less than delighted by this arrangement. “My relationship with Arturo and Patricia was complicated,” observed Redé with commendable restraint.

The baron with the Duchess of Windsor

In 1946 Redé moved to Paris. Anyone who has deplaned miserably at Charles de Gaulle and crawled through traffic-choked streets to their hotel can only envy Redé’s entrée into the city. Accompanied by society decorator Elsie de Wolfe, he was picked up in a Rolls Royce belonging to British Ambassador Duff Cooper and taken to top restaurant Le Grand Vefour, there encountering, among others, Jean Cocteau, the saloniste Marie-Laure de Noailles and Count Etienne de Beaumont, the great entertainer whose parties had even coaxed Proust out of his cork-lined room back in the day (the Baron’s own social events would become the talk of Paris, but we will return another time to admire his magnificent balls). 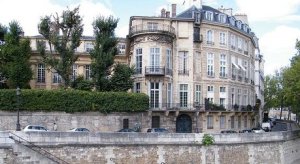 Rolling with a crew like that, you know Redé’s crib isn’t going to be anything ordinary. Shortly after his arrival the Baron rented an apartment in central Paris’s finest private residence, the Hôtel Lambert, which dominates the eastern tip of the Ile Saint-Louis. It was built by Louis Le Vau, whose CV also included that humble shack Versailles, and one of the conditions of Redé’s relatively modest rent was that he must help restore the building.

Sublime ghosts crowded the Baroque salons; Mozart, Chopin and Liszt had all played there and Redé’s bedroom had once been Voltaire’s. For himself, Redé claimed “I am not a philosopher,” but he was being too modest. True, his  memoirs are short on metaphysical enquiry, but his pursuit of opulence and refinement was so rigorous as to in itself constitute a model for living. “I lead a self-imposed life of luxury,” he announced, “style, courtesy and elegance are my prime considerations”.

Lopez-Wilshaw died in 1962, leaving the baron half his fortune and in 1975, the baron’s great friends Marie-Hélène and Guy de Rothschild bought the Lambert and Redé could relax, knowing that his hyperaestheticised existence was secure. He continued decorating the house as long as he lived, and the 2005 auction of his estate included such museum-quality pieces as a solid silver chair, agate snuff boxes and porcelain services of such value and rarity that they could only be washed up in the presence of insurance company representatives. His personal effects, including an Hermès money clip, silver newspaper tongs, a Cartier cigar cutter and a huge closet full of hand-made shoes were testament to the baron’s obsessive pursuit of domestic perfection. He even took his own sheets with him to hospital.

In the 21st century Redé had himself become something of a museum piece, remnant of a vanished milieu for whom a well-laid table was the greatest good to which humanity could aspire. “Most of the world moves too fast for hand-made shoes, and elegant luncheons,” he reflected sadly, before dying in 2004.

Meanwhile the Hôtel Lambert, having been bought by a member of the Qatari royal family, faces an uncertain future.

Arturo Lopez-Wilshaw, one of a wave of fabulously wealthy South Americans who rose to social prominence in Paris in the early 20th century. Lopez-Wilshaw made his money from potassium-rich guano deposits, and someone who could turn shit into gold was just the kind of man the baron needed to finance the lifestyle to which he very much wanted to become accustomed. Lopez, irritatingly, already had a wife, Patricia. “My relationship with Arturo and Patricia was complicated,” observes de Redé with commendable understatement.