A century and a day after the lonely, anonymous death of Comte de Lautréamont came the spectacular suicide of another literary cult figure, this time one who lived and died in public. 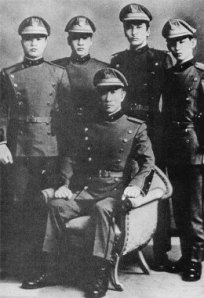 Mishima with members of the Tate-no-kai

Yukio Mishima, the most famous and successful Japanese writer of his time, had an appointment with Lieutenant-General Kanetoshi Mashida at the Tokyo headquarters of the Eastern Self-Defence Force at 11a.m. on November 25, 1970. Mashida knew the writer and was unconcerned that he and his four companions were carrying swords, “for ceremonial purposes”. Mishima’s operetta “militia”, Tate-no-kai (“Shield Society”) was well known, but the ultra-nationalist group numbered only 100 members at its peak and was never taken very seriously (one government minister compared them to the cross-dressing all-female Takarazuka theatre troupe).

But once alone with the general the five men took him hostage, and Mishima demanded the opportunity to address the Defence Force, and 1000 members were duly assembled in front of the building.

Mishima harangued the crowd, urging them to rise up, overturn the constitution and rededicate themselves to the Emperor. Realising that they were indifferent or indeed actively hostile to his message, he retreated.

Returning to the general’s office, Mishima bared his chest and, following the guidelines of hara-kiri, plunged a dagger into his abdomen and gouged a straight line through it. At this point his lover Masakatsu Morita was supposed to behead Mishima, but after a couple of failed attempts another of the quartet finished the grisly task, and Morita himself then underwent the same ritual. 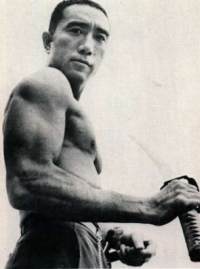 In the first clip of the three clips below, the urbane Mishima talks in elegant English about consumerism, kabuki, the revival of Samurai virtues and, inevitably, hara-kiri. “I don’t want to revive hara-kiri itself,” he claims, “but through…hara-kiri I wanted to inspire and stimulate younger people. Through such a stimulation I wanted to revive some old traditional sense of order, or sense of very strong responsibility…that’s my purpose.” In the event his suicide did inspire copycat attempts of young men hoping to emulate the  “elegance and brutality” of Mishima’s act.

Mishima’s suicide prompted extensive debate on whether it was a political act, or one borne of the writer’s evident exhibitionism and theatrical sense of tragic destiny. “Narcissism is the mainspring of art,” said Japanese writer Taruho Inagaki, “but in Mishima’s case it was not introverted but rather was extroverted without restrictions. Mishima’s writing lacked nostalgia, so that the more he wrote the more artificial he became.”

In this shorter clip, filmed for Canadian TV, the writer talks almost exclusively about politics and the military. Mishima, who had once worked in a factory manufacturing planes destined for kamikaze missions, ruminates calmly on Japan’s military role, and we get a longer look at his private army being drilled.

Four months before his death, Mishima invited a TV producer to his house for dinner and asked him whether his death would be the top news story on the day it occurred. Receiving confirmation, Mishima further asked, “if I performed seppuku, would you film it and broadcast it live?”

At his funeral, Mishima’s mother said “you should have brought red roses for a celebration. For the first time in his life he did what always and desperately wanted to do. Be happy for him.”