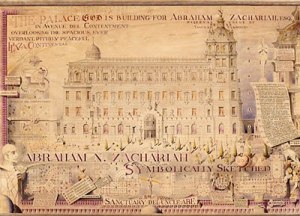 Few artists were ever so comprehensively ignored in their own lifetime as A.G. Rizzoli. Born in 1896 in Marin County, California to Italian-Swiss immigrant parents, Rizzoli led a modest life as a draughtsman for a San Francisco architecture firm and died on this day in 1981. The reason we now discuss this shy, outwardly unremarkable man is the discovery, nine years after his death, of hundreds of drawings and writings that Rizzoli had committed to paper in his spare time. It was one of the most significant such finds of the 20th century. 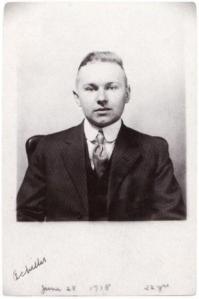 Working in complete isolation, Rizzoli transformed the prose of architectural drawing into transcendental poetry, pulsating with autobiographical and spiritual significance. Long before The Sims and Second Life, this prolific idealist was constructing his own dream world and populating it with avatars of real life figures.

Rizzoli was initially classed as an Outsider artist, and superficially he has much in common with the likes of Henry Darger: intensely personalised spirituality, infantilised sexuality, and text and graphics falling over each other in an overpowering rush of self-expression. But while he was something of a loner, Rizzoli didn’t have the tragic back story of mental illness, incarceration or social exclusion common to many Outsiders. Moreover he was not self-taught. Instead, he took a discipline of rigorous exactitude and liberated it to expressive ends. 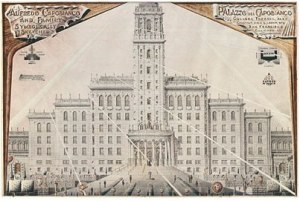 It might be more useful to examine this unique body of work in the grand tradition of Christian mysticism, of bricks and mortar metaphors for the mysteries of divine grace from Augustine’s City of God via Teresa of Avila’s Interior Castle to Blake’s Jerusalem. Rizzoli frequently referred to God as “master architect divine”, a conception echoed by the trope of God as the Great Architect, a cornerstone (or pillar, if you will) of Freemasonry. Rizzoli saw himself as “interpreter”, “paraphraser” or “transcriber” of celestial visions, with ultimate credit always reserved for You-Know-Who.

In his day job, Rizzoli followed the clean lines of Modernism. His private works, on the other hand, were extravagant variations on the vivaciously eclectic Beaux-Arts style which borrowed liberally from Western architectural history, parading each era of ornamentation as if allowing it one last encore before being ushered off-stage by the demands of the machine age. These pastiches show European forms in American abundance, abounding in flights of structural fantasy and decorative incontinence. 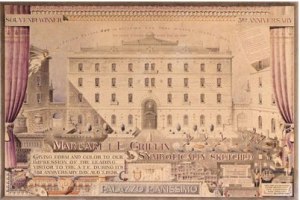 Key works served to symbolically represent family members and acquaintances. The importance of a person in Rizzoli’s life could be measured by the size of the edifice dedicated to them, and the frequency with which they were portrayed. His mother is a constantly recurring subject, and in real life Rizzoli continued to sleep at the foot of her bed long after her death. Curiously, when drawing actual humans Rizzoli’s line, normally so assured, becomes coy and maladroit. Faces are agog, as if surprised to find themselves adrift in an architectonic mash-up. 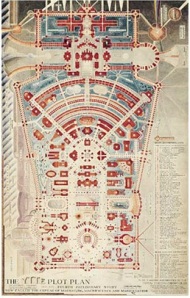 Rizzoli’s crowning achievement was Yield to Total Elation (YTTE), a city which he began designing in 1935, evidently inspired by a San Francisco expo he had seen 20 years earlier. While he never imagined this to be a buildable entity, the overarching schema of structures in measured relation to an emphatic axis mirrors planned cities of the New World such as Brasilia and Canberra. And as in revolutionary, anti-clerical France, where churches were rededicated to various public virtues, Rizzoli’s buildings honour civic abstractions such as Peace, Labour and Justice.

This self-contained world comes with its own dialect, teeming with puns, acronyms and invented words, with meaning and allusion ricocheting off each other, sometimes obvious, more often forbiddingly opaque. Like his contemporary, visionary American architect Buckminster Fuller, Rizzoli was never shy of a neologism. For both men, language was as malleable as wet plaster. 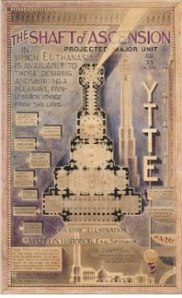 Rizzoli made sporadic attempts to find a wider audience for his visions. After (unsuccessfully) seeking publishers for his idiosyncratic writing, in the last half of the 1930s he organised annual exhibitions of graphic works in his home, but apart from a pair of co-workers and local children, they were utterly ignored. A poignant notice in Rizzoli’s hand optimistically advertises group discounts.

Now of course, groups do indeed crowd his exhibitions, and individual works sell for five- and six-figure sums. Rizzoli’s closest living heir is arguably Orville Simpson II, an American eccentric, also a life-long bachelor, who for decades has been designing Victory City, a group of skyscraper dwellings based on hyper-rational principles. Simpson may just be the stranger of the two: he continues to solicit investors in the belief that he can actually bring his dream to life.